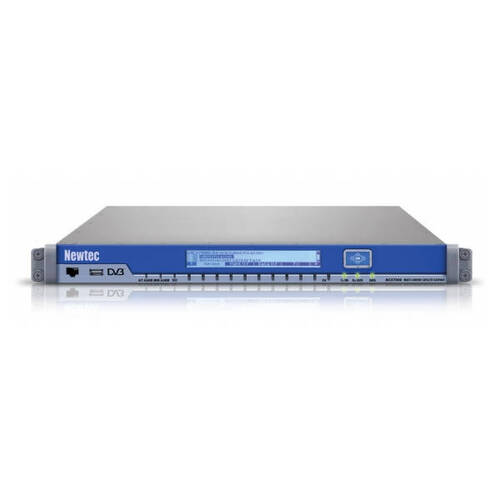 The Newtec MCX7000 is a new dense DVB-S2X multi-carrier satellite gateway for efficient distribution to towers and headends, or for use in back-up or dense DTH HUB stations, resulting in OPEX and CAPEX savings. This 133 Mbaud modem is also fit for broadcast contribution applications on standard and HTS spotbeam transponders.

Compatible with the Newtec Dialog® multiservice broadcast platform, it brings increased bandwidth efficiency of up to 51% and features multistream, as well as Newtec's Clean Channel Technology® and its linear and non-linear pre-distortion technology Equalink® 3.

Building upon the MDM6100 Broadcast Satellite Modem software suite, the enhanced hardware platform of the MCX7000 extends the modem capabilities beyond single carrier support. In a  multi-modulator configuration,  four 133 Mbaud carriers acc. DVB standards up to DVB-S2X can be generated. In a first releasemulti-demod modem configuration, three 133 Mbaud carriers can be demodulated, next to modulation of a 133 Mbaud signal with full support of the DVB satellite standards up to DVB-S2X. Each and every Transport Stream embedded in one of the received carriers can be output on one of the six (optional) ASI or dual Ethernet ports. The same data interfaces can be used as input ports for the modulator. Transmodulation of a received stream is also an option.

Its remote in-band management and software upgradeability makes it the receiver equipment of choice for remote unattended towers and headends. Subsequent releases of this future-proof DVB-S2X platform guarantee, by simple software upgrade, even increased functionality and higher density.