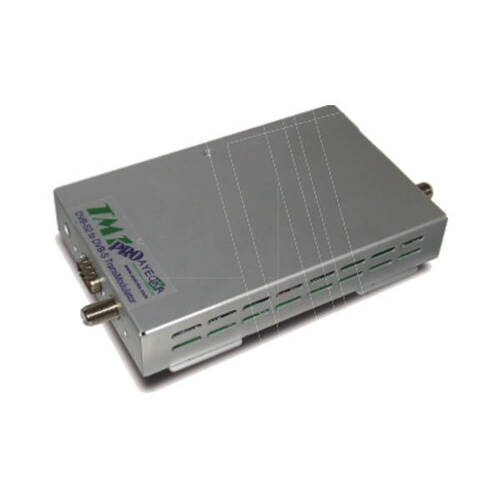 Ayecka Patented technology (US patent 7,603,075) provide SNMP interface to theTransmodulator. Using this interface, Ayecka implement ACM with the TM1 Pro.TM1 Pro is also used to upgrade DVB-S2 CCM receivers to operan VCM/ACM modes. Hundreds of TM1 Pro units are deployed all over the world, providing operators the OPAX advantages of DVB-S2 with out the CAPAX burden of migration.

Hundreds of TM1 Pro units are deployed all over the world, providing operators the OPAX advantages of DVB-S2 with out the CAPAX burden of

Thanks to the Ayecka TM1-Pro, operators of existing DVB-S based VSAT networks can now easily migrate to DVB-S2 and take advantage of savings in operational costs. Rather than replacing the VSAT itself, a simple and cost-effective upgrade can solve the DVB-S2 compliance requirement. The new TM1-Pro trans-modulation solution from Ayecka enables a smooth, quick, economical migration path to improve existing VSAT assets.

Minimal logistic efforts are required to implement the TM1-Pro upgrade, and the ROI payback is estimated at 5-7 months.

The Ayecka TM1-Pro is a unique trans-modulation device designed as a practical and trouble-free way to migrate existing VSAT and one way networks to DVB-S2. The TM1-Pro is an indoor unit easily installed by the end user between the LNB and the VSAT.

The TM1 operates as a transparent and integral upgrade to the network. The TM1 makes it simple and cost effective to migrate to the more efficient DVB-S2 standard, thus protecting the current investment in the VSAT network

The TM1-Pro converts DVB-S2 signals to DVB-S allowing use of DVB-S receivers with DVB-S2 links. Integration of the TM1-Pro with existing receivers (VSAT or one way) is quick and simple. An operator need only configure the IRD to receive an L-Band input of 1Ghz at 27Msps. The TM1Pro is configured according to the satellite signals parameters.

TM1 Pro is the optimal solution for upgrading existing 8PSK DVB-S2 networks to 16APSK, or existing CCM DVB-S2 to ACM or VCM.

The TM1 Pro was designed to simplify the upgrade process - both in cost and time.

DVB-S2 is the second-generation standard for satellite broadcasting, which has been widely adopted by the broadcasting industry. The new standard benefits from recent developments in channel coding (LDPC codes) combined with a variety of modulation formats (QPSK, 8PSK and 16APSK). This more efficient technology yields increased transmission capacity along with ~30% improvement in space segment utilization.

Companies which have invested in DVB-S based VSATs are facing a situation where this technology may become obsolete due to the onslaught of the new DVB-S2 technology. The new-generation DVB-S2 technology offers several advantages over DVB-S, the main ones are 30% savings in bandwidth and support for multi stream.

From a technical perspective, existing DVB-S VSATs can continue to provide most of the services like Return channel and Routing, It is the receiver that has to be upgraded.